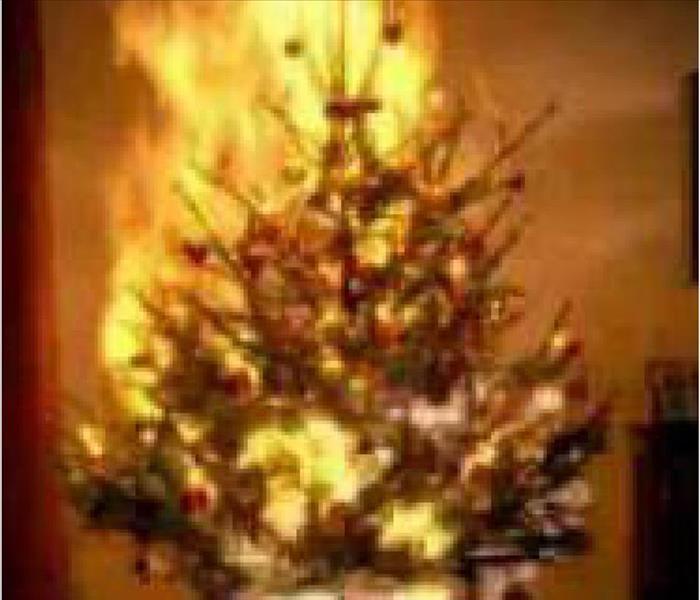 Local SERVPRO® restoration specialist cautions Santa Maria homeowners to take common sense precautions throughout the holiday season Santa Maria, CA (Grassroots Newswire). Most homeowners are aware holiday decorations should be used with care. Each year, statistics tell the story of the fire danger resulting from frayed wires, proximity to heat sources, and lights left on unattended. But Mark Powers of SERVPRO of Santa Maria wants local homeowners to know that the danger of fire caused by holiday decorating, and by Christmas trees specifically, actually increases after the holiday. Citing research from the National Fire Protection Association (NFPA)*, Powers says while four out of five Christmas tree fires happen in December and January, the 10 days with the highest average number of fires were all after Christmas Day.

“For many families, preparing for the holiday season is a very busy time,” said Powers. “Come December 26, it’s tempting to relax and stop watering the Christmas tree, replacing bulbs in outdoor lights and tucking indoor garlands back into place. Dry greens, open sockets and decorations that slip dangerously close to light sockets or fireplaces can all increase the risk of fire in the days after the Christmas holiday.”

The American Christmas Tree Association** quotes Nielsen research that says Americans purchased 21.6 million live Christmas trees in 2011. That number is significant because, according to the NFPA, Christmas trees remain the number one culprit in holiday fires. Forty-three percent of Christmas tree fires happen in December, but January is close behind, claiming 39 percent—numbers that demonstrate the danger of allowing Christmas trees to dry out during and after the holiday season. Tragically, Christmas tree fires are particularly deadly, claiming on average one life in every 40 fires compared to an average of one death per 142 total reported home fires.

Powers encourages Santa Maria homeowners who choose to decorate with live Christmas trees to be diligent about watering their trees both before and after the holidays. “When a Christmas tree dries out, it takes only a single spark from the fireplace, a draft that blows a candle flame too near, or a carelessly held cigarette to turn your holiday celebration into a tragedy,” says Powers. “Beyond the damage from the fire itself, a Christmas tree fire, like any fire, can result in extensive smoke and water damage throughout your home, and can even be deadly.”

As the holiday season moves into full swing, Powers reminds homeowners to take common sense precautions based on a clear understanding of the potential danger to help prevent holiday traditions from turning into a holiday nightmare. For more fire prevention tips and information about fire and water damage restoration services, please visit http://www.SERVPROsantamaria.com/

About SERVPRO®
Founded in 1967, the SERVPRO® Franchise System is a national leader and provider of fire and water cleanup and restoration services and mold mitigation and remediation. SERVPRO’s professional services network ofnearly 1,700 individually owned and operated Franchises responds to property damage emergencies ranging from small individual disasters to multi million dollar losses. Providing coverage in the United States and Canada, the SERVPRO System has established relationships with major insurance companies and commercial clients, as well as individual homeowners.